Book Review & Recipe: The Green and the Red, A Novel // Pumpkin Wonton Soup 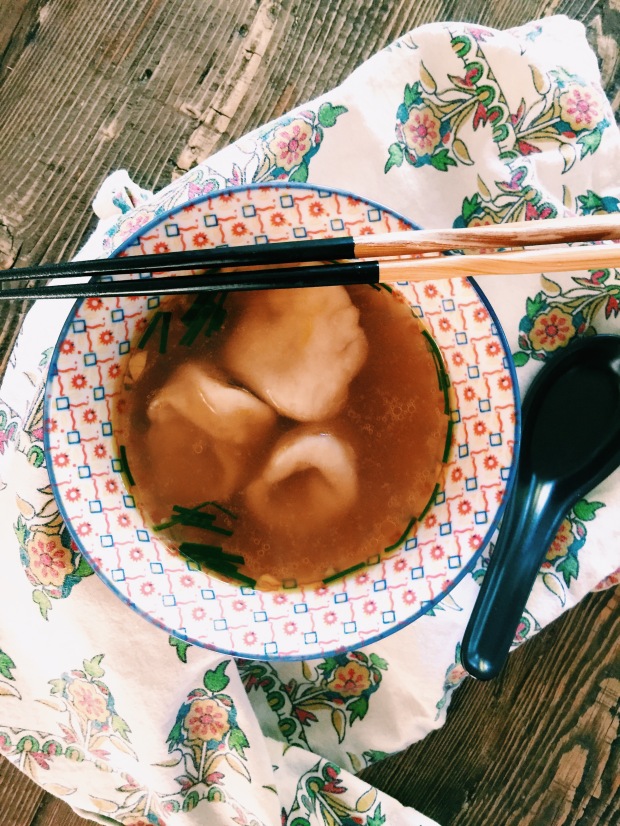 I have these daydreams. They come to me at all times of the day and for a moment I’m seduced into thinking the world has actually gone completely vegan. That’s right. The sidewalks in my daydreams are walked upon by pleather shoes, the streets are lined with restaurants that no longer indicate their vegan offerings because, well, there’s no need to when it’s the norm. An ice cream truck plays its whimsical tune and I skip up to the window to be asked by the ice cream man: “Will that be almond, soy, rice or coconut for you today?”

I know. Amusing, right? But I feel like every day we witness small victories that bring us closer to this romantic vision of a vegan world. For example, I was recently doing research for a trip my husband and I are planning to take next summer and I stumbled upon multiple travel agencies who cater to the specific needs of the wayfaring vegan. There are even cruise packages that are completely vegan. There are vegan tattoo parlors that use inks free of animal ingredients. There are exclusively vegan hair salons, clothing boutiques, and grocery stores. The service industry has taken due notice of the changing consumerist landscape and to this, we offer a toast.

But one area of culture that remains relatively untouched by society’s increasing focus on food ethics, is popular media. Sure, we have tons of documentaries and academic theses making their way into the public psyche, but we don’t have much of the fun stuff that a vegan gal like myself needs when she just wants to lay back, enjoy a green smoothie and relax. Where is my romantic film in which lovers exchange glances over a roasted beet salad, him tenderly placing his faux wool coat over her bare shoulders as she reaches gingerly into her synthetic handbag to retrieve her vegan lipstick? Where’s my entirely plant-based cooking competition show on The Food Network? Where’s my animal-friendly literary fiction genre in the bookstore?

Well I have good news, my friends. As is the case within the service industry, popular media also continues to take steady strides toward a new reality in which animals are valued and vegans represent the status quo. I present to you The Green and the Red, an enchanting, witty novel written by Armand Chauvel, translated from the French by Elisabeth Lyman, and published by the eco-progressive publishing house, Ashland Creek Press. This is a piece of pop culture we vegans can see ourselves in, something we can relate to with every fiber of our animal-loving being.

She’s a vegetarian. He’s a carnivore. Will it be a table for one?

Léa is the owner and chef of La Dame Verte, a vegetarian restaurant struggling to survive in the small French town of Brittany, known for its prevalent pork industry. Mathieu is a power hungry marketing director of one such pork producer who sets out to destroy Léa’s business in order to take over the restaurant’s prime real estate. They meet when Mathieu walks through the doors of La Dame Verte, posing as a vegetarian in order to collect information that will aid him in his deceptive plan. Léa suspects something isn’t quite right about Mathieu but the attraction on both sides is undeniable. That is, until Léa learns the truth.

This romantic novel has all the twists and turns we’ve grown to love and expect from the genre. The comedic inability of the star-crossed lovers to connect, the moments of heartache as they struggle to prioritize each other despite differing convictions, and the intelligent, flirtatious banter that keeps your finger on the bottom, righthand corner because you simply can’t wait to turn the page.

Now if romance isn’t your preferred genre, don’t be easily deterred. It becomes clear from the beginning of the book that author Chauvel is intimately familiar with the world of animal agriculture, animal rights and the politics of food. Take for instance, the character of Pervenche, Léa’s militant, vegan sous chef who’s always pressuring Léa to strike eggs and dairy from the restaurant’s menu and go full-fledged vegan. Pervenche won’t even touch “tofu ‘sausage,’ seitan ‘steak,’ or vegetarian ‘kebobs'” because she considers “imitation meat products as unbearable dictates, an encouragement of what she [sees] as the ‘ideology of meat as a necessity.'”

Readers are also given front row seats to an animal rights demonstration on the streets of Brittany, to a covert operation to expose the harsh conditions of a pork-producing facility, and to a crowd gathered in the city plaza to celebrate Veggie Pride.

And let’s not forget the food! On Mathieu’s first visit to La Dame Verte, he orders “pumpkin wonton soup as a starter, mushroom and polenta mousseline as his main dish, and flourless chocolate cake for dessert.” Can you say, DROOL?!

The Green and the Red seamlessly blends romance, suspense, politics and foodieism into one rollicking novel that is both a leisurely read and a challenging treatise. It’s a novel for the critical thinker who also enjoys a good old-fashioned love story. A great introduction to (or review of) the fundamental issues facing vegans and omnivores in regards to the food we eat, The Green and the Red is a must-read for anyone with a heart, mind or belly inclined towards compassion.

RECIPE INSPIRED BY THE GREEN AND THE RED: Pumpkin Wonton Soup

As soon as I read about Mathieu ordering Léa’s Pumpkin Wonton Soup, I knew I had to make it. Take a look at Chauvel’s description of the deliciousness:

Spoon in hand, [Mathieu] contemplated his pumpkin wonton soup apprehensively, as a cat might look at a puddle of water blocking its path. But he was starving, so he brought a spoonful of the concoction to his mouth. He could always spit it out if it was too disgusting. But the wontons had a nice texture, the pumpkin was smooth and savory, and the broth offered a tasty combination of ginger and garlic.

There was my ingredient list! My version of Léa’s soup is relatively simple to make, so long as you’re willing to put some elbow grease into it. The sweet and savory pumpkin offers a divine contrast to the slight acidity of the broth. This soup will make a substantial main dish but can also be served as a starter.

Here’s what you’ll need. You’ll soon be on your way to dining alongside Mathieu at a quaint table in La Dame Verte (makes approx. 21 wontons):

For the wonton skins:

For the wonton filling:

Begin by making your wonton skins. In a large mixing bowl, sift together the flour and salt. Slowly add the warm water, kneading the dough with your hands. The dough should be fairly stiff, yet workable. Cover the dough with a towel and let it stand for 20 minutes.

The dough, ready to be covered for 20 minutes

Next, make your wonton filling. Simply stir the ingredients together in a small mixing bowl.

Use approximately half of a 15-oz can of pumpkin

Orange extract can be found at most specialty kitchen stores

As the soup cooks, get ready to prepare your wontons. Lightly flour a smooth, clean surface and grab your rolling pin. When your dough has finished resting, roll it out onto the floured surface, trying to get it as thin as possible. Use a pastry cutter to cut it into squares approximately 3.5″ x 3.5″. 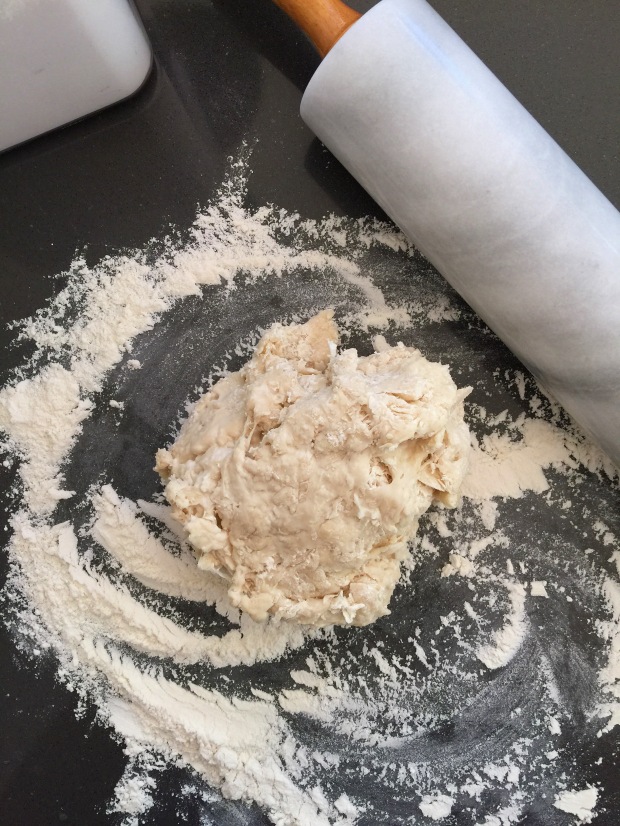 Place a small spoonful of the pumpkin filling into the center of a square. Fill a small bowl with warm water and using your finger, moisten each of the four sides of the square with water. Gently fold up two opposing corners and pinch to make a triangle. Carefully pinch the sides to close the triangle, then cinch the sides as you would with an elastic hemline on a skirt. When the triangle has been successfully pinched and cinched, wrap the corners around until they meet, then pinch them together, using water to moisten if needed. Repeat this process of rolling out dough and filling the squares with the pumpkin filling until all the dough is gone. This yielded 21 wontons for me. 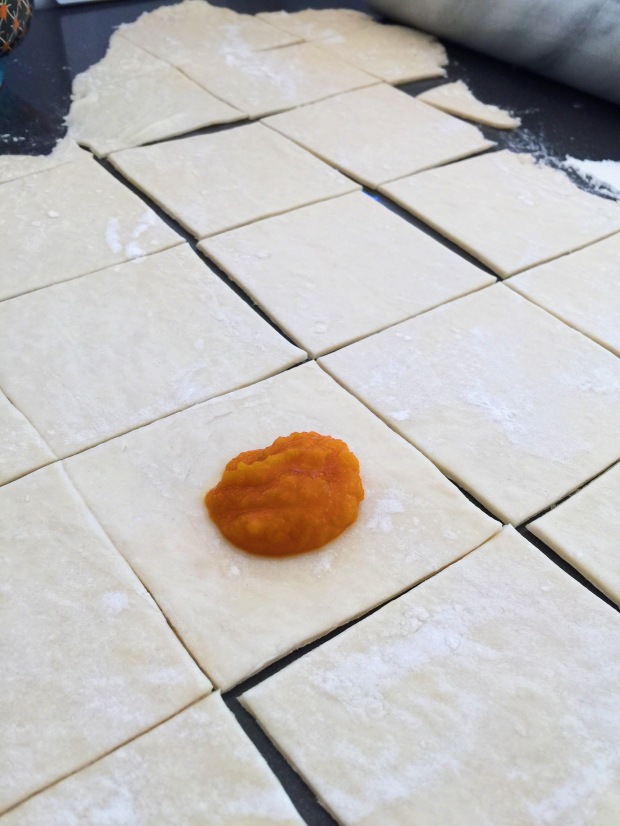 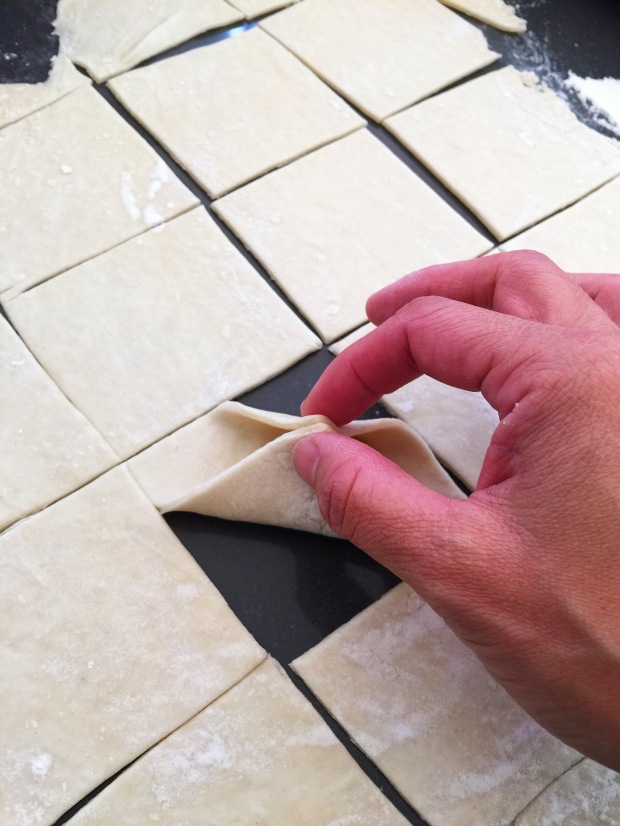 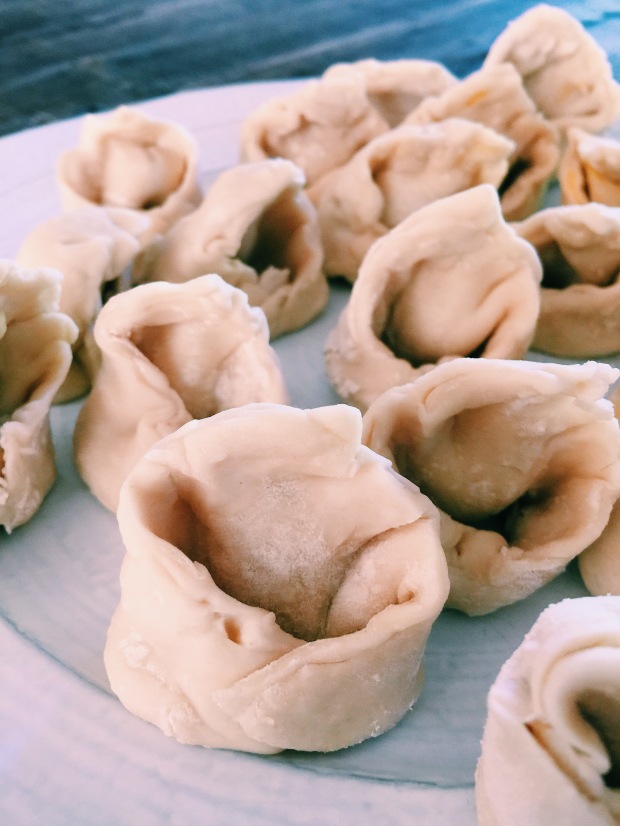 Food doesn’t get much cuter than this!

With a slotted spoon, gently lower your wontons into the soup broth, one by one. Continue cooking over medium heat until the wontons have floated to the top, about 5 minutes.

Add the rice vinegar to the soup pot and sprinkle your chives on top. 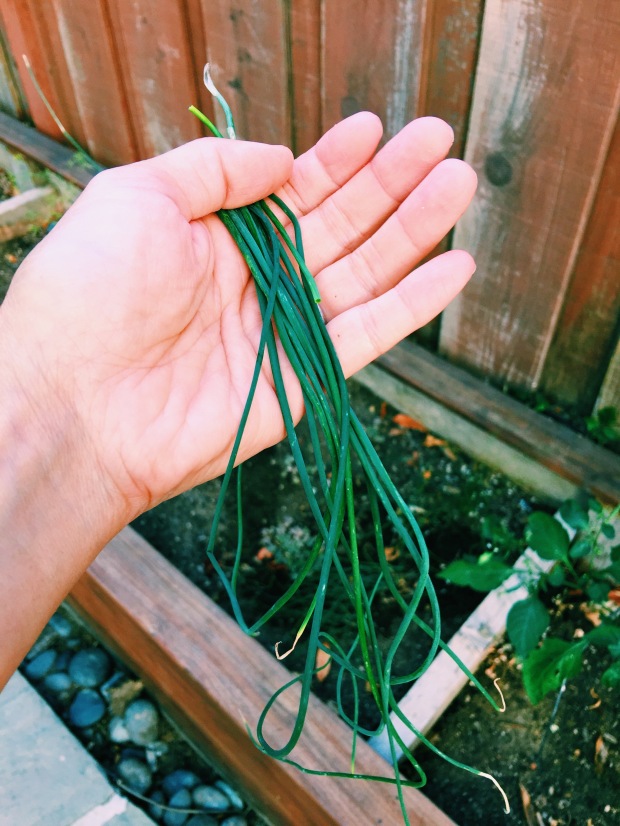 Fresh chives from our garden

Ladle into bowls and serve. Or make it soup for one and curl up with a copy of The Green and the Red. You won’t be disappointed! 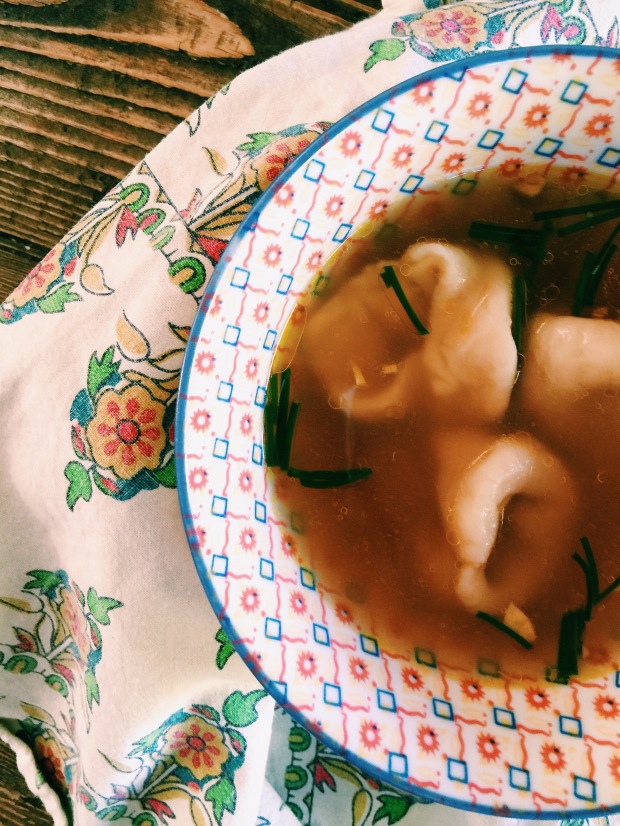 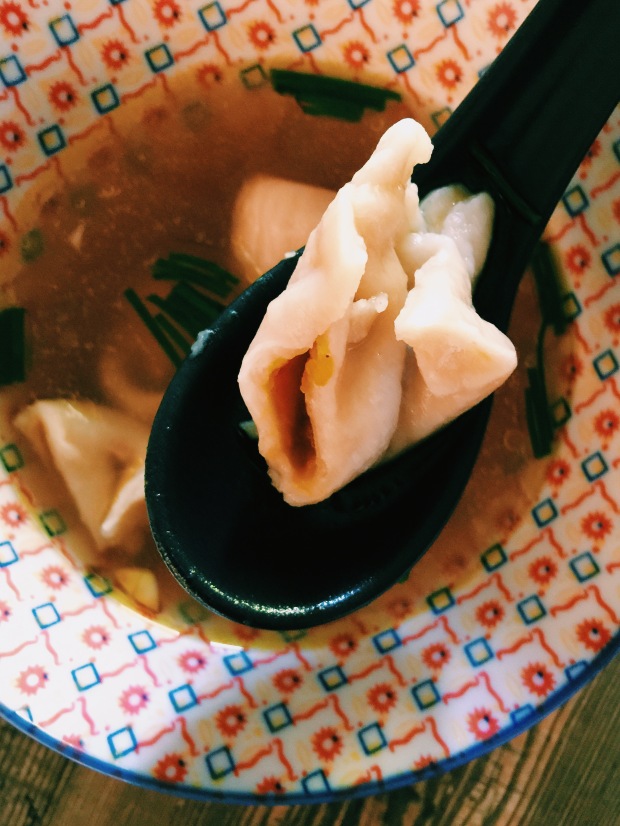 Happy eating or should I say, Bon appétit!

8 thoughts on “Book Review & Recipe: The Green and the Red, A Novel // Pumpkin Wonton Soup”

Talk to me! Cancel reply